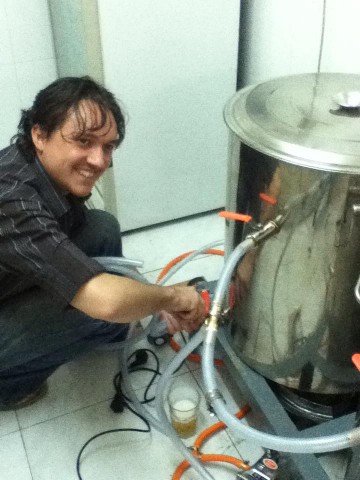 Hi, my name is Jesse.

I am passionate about making great beer of all types, with experience ranging from a 20L home-brew kit through to a 24 hour production brewery turning out 20,000 Litres per day.

I’ve been a brewer and a brewing consultant for both breweries and homebrewers in Australia, China and Japan.

I’m here to help you create your winning beer, whether that means a single batch of your perfect Pale Ale, or a 100 litre micro production being served through chilled bar fonts to hundreds of people – I hope my experience and advice can help you.

My journey started many years ago when a good friend gave me his second hand ‘Coopers Homebrew Kit.” It was glorious – all the promise of cheap beer and lots of it! My first batch was fermented and bottled… and it tasted like something unspeakable. It was awful.

My brewing equipment spent the next few years collecting dirt under the house, until I came across a local home brew store which promised to turn my beer into something just like any commercial beer I could name. I dug up the old fermenter, cleaned her out and got back to work – I made a clone of the James Squire Pilsener!

It wasn’t exactly what I hoped, so I tried a new recipe, and another new recipe with a little extra equipment… two years later I was operating a 40 Litre combined mash-lauter tun, a bar with two taps, serving whichever two beers I had most recently released and I had a notebook crammed with recipes.

Oh, and I had been hired by the local home brew store. It was fantastic – talking about my hobby all day, helping others to learn, learning from others, not to mention the considerable expertise of the store owner and some serious education in supplies and ingredients.

From there I ended up working in a contract brewery supplying Australian craft brewing companies with their product (If you have been on the East Coast of Australia and tried a craft beer, there’s a strong chance you have tasted a beer I have made.) I went to China where I helped tiny craft breweries and homebrewers alike and I have been a guest brewer in several craft breweries across China, Japan and Sydney, Australia.

The joy of making great beer is something we can all share, and our great beer is shared by our friends and families. Please use this site as your assistant as you grow and improve your craft, and drop me a line when you create your next Winning Beer.